The past year was one for the record books as deals hit highest value in over a decade, but global tensions could put the handbrake on confidence.

The escalating war in Ukraine and the fallout across European nations and economies threatens to take the steam out of the M&A market, according to Baker Tilly experts, even as a new report shows the strong momentum of dealmaking in 2021.

More than half of the respondents (53 percent) in the annual outlook expected mid-market deals would drive global M&A in the year ahead, building on 2021’s strong results.

Mid-market deals accounted for 31% of global transactions in 2021, and with dealmakers’ sights set on mid-cap deals to fast-track growth, this figure was considered likely to maintain its upward climb.

Mid-market transactions increased to 10,523 from 8,500 in 2020, suggesting dealmakers are continuing to leverage the strong fundamentals and track records of businesses expanding into new markets.

But even before the war in Ukraine, dealmakers were sounding the alarm on escalating global tensions.

Europe’s M&A recovery has been less dramatic than in other regions, with deal totals down from 2020 and well below pre-pandemic figures. Still, deal values rose sharply, up 50 per cent to US$1.35 trillion.

While the pace of M&A picked up in the second half of the year, as a series of mega deals was announced in Europe and competition erupted for highly prized assets, there is no doubt the Ukrainian war will stall some dealmaking.

“In situations like these, as we saw in the early part of the pandemic, deal doers (and makers) tend to pause, take a breath, and evaluate the situation to see how it will play out.”
– Rob Dando

“The war in Ukraine, and the political and economic uncertainties it brings could cause a slowdown in the M&A market,” says Rob Dando, Corporate Finance Partner & Transaction Services Leader at MHA MacIntyre Hudson, part of the Baker Tilly Network in the UK.

“We have had feedback from clients already that the process of obtaining new funds for dealmaking could take much longer than initially expected, especially in the US with companies looking to transact in Europe.

“In situations like these, as we saw in the early part of the pandemic, deal doers (and makers) tend to pause, take a breath, and evaluate the situation to see how it will play out.”

It remains to be seen if the impact of those concerns will be contained to Europe or whether other regions will continue to transact at a rapid pace.

North America was the top geography by M&A deal value in 2021, recording nearly US$3 trillion in deals, while the Asia Pacific region had the highest level of deal volume, with more than 11,500 deals.

Mr Dando said there were numerous factors that dealmakers internationally would need to assess when deciding to pursue or progress deals in the shadow of war.

“It might be, how will this impact global commodity prices, energy prices and the equity capital markets for example,” he said.

“These macroeconomic effects then filter down into the mid and smaller markets. We have not yet seen a slowdown but that doesn’t mean to say there won’t be one.”

Dealmakers look for the signs

As with COVID, dealmakers will be looking to signals and leading indicators to determine how this new wave of disruption will impact activity.

Last year confirmed the ongoing strength of the tech sector as a leading source of deals, thanks to the pandemic-led acceleration of trends like e-commerce and cloud-based remote working.

Tech accounted for 33 per cent of global M&A deal volumes and 36 per cent of deal values last year.

The pharmaceutical industry also has naturally captured dealmakers’ attention with the rapid expansion of the biotechnology sector, developing new vaccines and treatments for COVID-19.

“Dealmakers are now looking at how these intersect, when assessing targets that are going to deliver value and spur growth in the latter half of this decade.”
– Michael Sonego

This sector accounted for 10 per cent of global M&A last year, in both volume and value.

But the defence sector had a challenging year, with few deals and little value in transactions. Agriculture represented less than one per cent on each scale.

Recent events could change that — and could also trigger rapid consolidation and change in the energy, industrial and agricultural sector as Europe moves to uncouple industry and countries from reliance on Russian exports.

Baker Tilly Corporate Finance Lead Michael Sonego says the COVID concerns that dominated thinking in 2020 and 2021 have now been outpaced by other challenges.

“While many deal discussions are still couched in terms of the current COVID challenges, other key macro issues, from climate change to the rise of cryptocurrencies, to the pace of digital transformation have their own centres of gravity,” he says.

“Dealmakers are now looking at how these intersect, when assessing targets that are going to deliver value and spur growth in the latter half of this decade.” 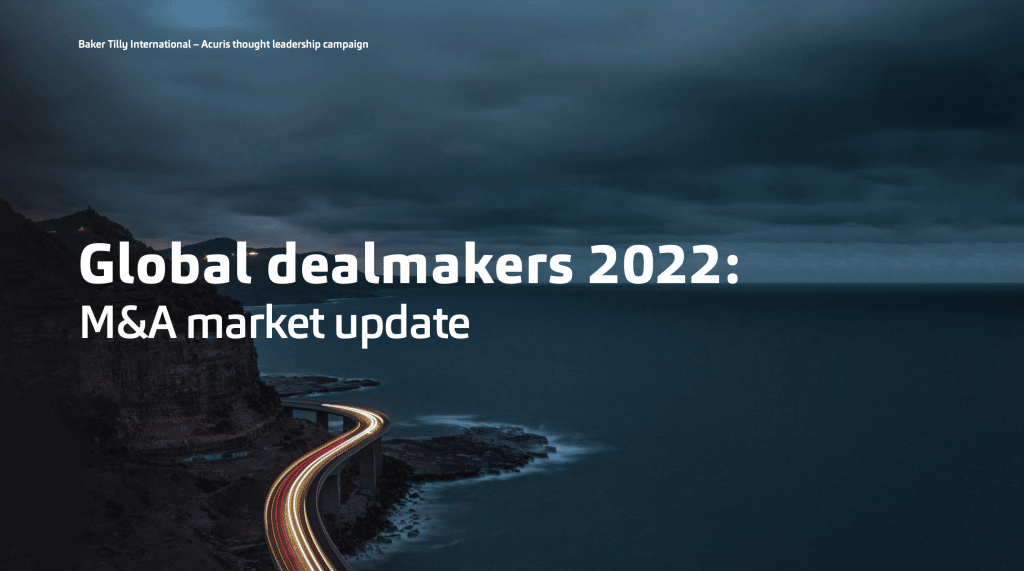 ESG more critical than ever in M&A M & A

The tide is turning for investments considered purely on financial terms, as new research confirms the rising importance of ESG to dealmakers.